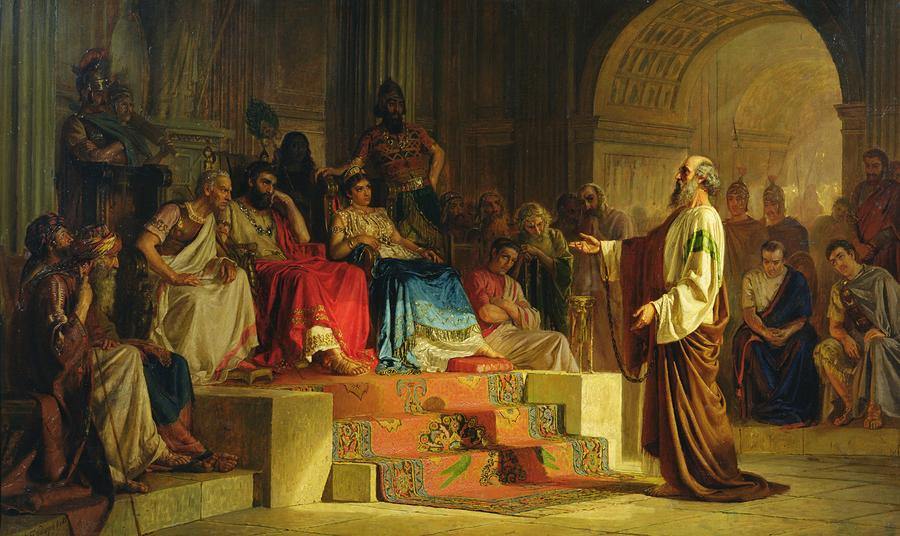 The Long Voyage of Acts

Luke spends last third of the Book of Acts, chapters 21-28, chronicling the Apostle Paul’s voyage to Rome.  This raises an important question as to the purpose of all  this.  Why does Luke, who has previously recorded 20 years or so of Paul’s missionary travels, devote so much space to Paul’s one journey to Rome?

There are two reasons. First, Luke sees in Paul’s journey the fulfillment of the OT prophecies that God would expand his saving kingdom to the ends of the earth.  Rome, though not geographically the farthest city west, will symbolically picture the ends of the earth. As the Book of Acts moves away from Jerusalem for the last time, the attempt of the Jews to kill God’s apostle will signify the end of the old covenant between God and Israel. As Paul begins his final journey we say goodbye to Jerusalem.  In 12 years or so, final judgment will come upon the nation Israel in the form of the Roman armies.

Paul’s journey to preach the gospel in Rome signifies the new covenant fulfillment of the promises of a new and better Israel, one without human boundary markers of Jew and gentile, and one where the people from all nations will serve the Lord from renewed hearts. The long voyage of Paul is Luke’s way to exhibit the glory of the new covenant and the fulfillment of God’s OT promises to establish his kingdom everywhere and among all types of people. In Paul’s journey, the transition from Old to New covenant is about complete.

The second reason for the long voyage in Acts is that Luke wants us to see how God expands his kingdom – and the answer is – through suffering.  The long voyage focuses on the many ways Paul suffered on the journey. Paul would be used to expand God’s kingdom while in chains. We’ve seen this before of course. God secured and established his eternal kingdom through the suffering and death of his beloved Son. And now he would expand his kingdom through another suffering servant – the Apostle Paul.

This is counter-intuitive to the way we normally think. We might think – Lord, if you want people to join your kingdom, then make your servants successful so that others would want to be a part of all this. Make them healthy, wealthy, respected, and always joyful. Make their churches places of excitement and outward glory.

But the Lord does not choose to expand his kingdom this way. He gives his people sadness mixed with joy, along with sickness, loneliness, and failure. He gives his churches conflict, weakness, and uses them in such weakness. He reaches people through means like the preaching the cross – means that are downright boring to unbelievers that God is not drawing to himself. All this suffering and weakness demonstrates that God expands his gospel kingdom not by human might, power, or wisdom, but by his Spirit.

So do not miss the forest for the trees in the third section of Acts. As you read about Paul’s voyage to Rome, you are seeing the promised expansion of God’s eternal kingdom as it transitions from the type that is Old Israel to the reality that is New Israel, all through the other-worldly means of suffering, all to God’s astonishing glory.

The Rev. Dr. Todd S. Bordow received his AA from Phoenix Community College, his BA from Arizona College of the Bible, his MDiv from Westminster Seminary California, and his Doctor of Ministry from Reformed Theological Seminary in Orlando, FL. Rev. Bordow has planted three churches for the Orthodox Presbyterian Church and is currently the Pastor of Cornerstone OPC in Houston, TX, where he resides with his wife, Cheryl. Todd is also the co-host of the KAISIS podcast. Todd’s first book was entitled, “What Did Jesus Really Say About Divorce?” Todd partners with Equip Gospel Ministries in lecturing our Certificate in Theology subjects.